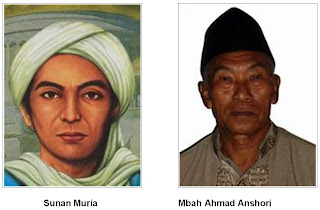 I owed an explaination on AMSM to a friend. Below is a long delayed introduction:

Asmak Malaikat is mainly a spiritual teaching of Java. This particular form of Asmak Malaikat Sunan Muria (AMSM) has the speciality that its invulnerability can be tested. This teaching does not belonged to a particular religion, but rather a tradition that teaches a technique of utilising angelic energy for the benefits of our well beings.

AMSM could be called as a form of metaphysics, the Javanese inner science. According to the meaning of the language, Asmak Malaikat consists of two Arabic words, namely Asmak means the names, and Malaikat, the Angels.

Asmak Malaikat consists of 5 levels. Level 1, 2 and 3 is the student’s level. While the level 4 and 5 revealed only to students who are considered wise enough to become a master/teacher. Each level of AMSM has angelic affirmations to foster the benefits of Asmak Malaikat. Affiirmations can be described as a key to unlock a door to higher energy.

Not every person who knows the affirmations of AMSM are able to benefit from reading these affirmations, unless that person has already received the blessing from a AMSM master through a process called “attunement” or “opening/alignment of energy).

A Brief History of AMSM

The servant of God who has received the grace as a transmitter of AMSM is Mbah Ahmad Anshori who was born in Jepara, Java in 1931. Initially his purpose of meditation on was to calm his mind. He did not expect to meet with master Sunan Muria. He fasted every day, performs worship, and did many recitations on God’s name every time. He just wanted to let go of his negative emotions that has arisen from the problems of life that has made him unhappy.

In short, after about two years Mbah Anshori’s meditation; on one night in 1978, he met someone who has introduced himself as Prince Gadung Sosro Kusumo and offered to bring Mbah Anshori to see Sunan Muria. Mbah Anshori asserted that he was not dreaming. He was in full consciousness when he followed Pageran Gadung Gadung from the tomb of the Prince towards the tomb of Sunan Muria. He could even hear the footsteps of Raden Gadung then. That signifies the embodiment of the Spirit Raden Gadung is a physical human being.

After getting the Level 1 attunement from Sunan Muria, Mbah Anshori descended down the mountain to apply his knowledge in the community. At that time Mbah Anshori did not know for sure the benefits of the teaching taught by Sunan Muria.

Mbah anshori later taught the angelic affirmations of AMSM Level 1 to a few villager of Bengkal, in the district in Gembong, Pati and . As it is fated, those who has gotten a lesion from Anshori then were tested quite accidentally to prove the benefits of Asmak Malaikat. Some of them hit by accident, involved in fights with sharp weapons. All those unplanned incidents did not hurt any of the students.
These bizarre incidents later made Mbah Anshori believed that the sermon of Sunan Muria is a science to salvation. Felt that his knowledge has not been perfected; Mbah Anshori went back to to meditate. As days passed, Sunan Muria continued to guide him. Mbah Ahmad Anshori has perfected the arts of AMSM and the Pamungkas Creed within two months.

The benefits of each level of Asmak Malaikat Sunan Muria (AMSM) are:

AMSM is consists of 5 levels with the “last testimony” named Sahadad Pamungkas. While AMSM is more on defensive; the Shadad Pamungkas is towards aggressive (attack and affect the physical and mind).
AMSM opens and activates the crown chakra as the entrance of higher angelic energy. Other benefits of AMSM are for safety, treatment of illness, cleansing negative energy, the rise in basic energy level, confidence, inner peace and so forth. According to Mbah Anshori, a Level 1 student when attacked will not cause pain or injury.

AMSM also opens and activates our palm chakra to channel healing energy to others. Open and activate the heart chakra to smoothen the distribution of angelic energy. Beginner of AMSM can use this energy to prevent and treat disease of self and others. It can also be used to disable people with bad intentions either towards you or your loved ones within a distance of about 1-5 meters away. Thus, there is no attack that can touch you skin.

AMSM also aids in the opening and activation of the navel chakra to maximize the formation of inner power. The angelic energy cleans the etheric body, refining energy, and cleans all of the major chakras, minor chakras, and energy channels for the preparation of a Master Asmak Malaikat. It further aids in the formation of high-level protective energy, energy drawn from various metal elements to the defence of an attack, dealing with high level of magical and physical attacks. AMSM also treats chronic illnesses.
Obtain the rights to give attunements at Level 1 to 3. AMSM L4 aids in mastering the technique of channelling angelic energy in inanimate objects of living creatures for protection and treatment of short range and long distance. It also improves the sensitivity of the palm of the hand (perfect for cleaning and activation of the palm chakras) for the detection of energy.

Obtain the rights to give attunements at Level 1 to 4. AMSM L5 Aids in the treatment of muscle and bone disorders without having to touch the patients. The position of the strained muscles and broken bones will be corrected by angelic energy. The opening of ajna chakra and crown chakra is more active, increase self-awareness, sharpen intuition, more sensitive to the natural cues, be a happy man and maintain his inner calmness in any situations, and various other benefits. Affirmations on meditation at level 5 activates all major and minor chakras, allowing a variety of spiritual potential that you can explore.

The Pamungkas creed is able to generate high-level power, long-distance blow to wicked or person in anger. It returns all evil doings to the perpetrators of crime, teaching lessons to the evil, reduce anger, heartbreaking, tame wild animals, turn hatred into love and many other benefits.The benefits of AMSM and Pamungkas Creed continue to evolve, as the development and experience of practitioners grow during the practice of AMSM. Many benefits ofter identified quite accidentally after an unexpected event. Frankly speaking, there are no limits to that of the AMSM. It is really open to anyone to develop the full potential of AMSM.