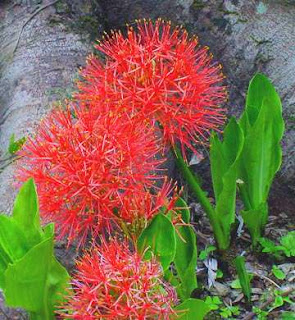 Blood lily is used in Vietnamese Malai Ngai practices
‘Hantu Penanggal’ is an all time favorite to talk about in Southeast Asia. It is a half human and half spiritual creature. In certain places in Malaysia it is known as ‘Penanggalan’ or ‘Menananggal’. It is known as ‘Balan-balan’ or ‘Berbalan’ in Sabah. However, Penanggal is known as ‘Tenggelung’ in Kedah. In the neighboring Thailand, this spirit is called ‘Phi Phop’ while in Vietnam it is called ‘Malai Ngai’. I suspect that the Vietnamese word ‘Malai’ refers to ‘Malay’.

It is said that when a Penanggal is flying at night, it looks like a pile of fiery rope that floats in smoke. This spirit can be seen during a full moon night flying across coconut trees while searching for its victims: women just gave birth.

Local believe that thorny plants or items can ward off the visitation of this Penanggal because thorns will cause the intestines to be entangled and hence this spirit will not be able to release itself. The most popular talisman used by the locals would be Pokok Mengkuang.

Once a Penanggal has consumed blood from its victim, its color turns to yellowish under the full moon light. Penanggal will produce noises similar to the chuckles of a lady and its abdominal vines will have white glow during flight. A Penanggal uses its intestines to immobilize and suffocate its victims. It is said that a Penanggal can sneak through door seams and it also fond of waiting on top of house roof waiting to ambush its victims should they came out of the houses.

Placenta, blood from childbirth and menstruation blood are said to be the favorite of Penanggal. Hence, the victim normally died from excessive loss. The sure sign of Penanggal attack is the bruise mark similar to that of love bites.

It is commonly believed that a Penanggal originates from a witch. The purpose of mastering this art is for power, revenge and protections. Practitioner of this art must keep a large quantity of vinegar so that the internal organs can contract and ease them from reentry. Because of vinegar, when a Penanggal is a ‘normal human’; the smell of vinegar emits from her body.

Grandmas always advice the young not to leave clothes hanging overnight as blood drop from intestine of a Penanggal is said to be poisonous. This blood can cause scabies when in contact with human body. The blood can also produce a type of creeping and thorny plants. Hence it is very easy to trace the whereabouts of a Penanggal practitioner: just follow the trail of the creeping plant.

Anyone who sees a Penanggal must shout ‘Penanggal’ as loud as possible because this will make the Penanggal to explode or to force it to return to its home. If anyone desires to call upon a Penanggal, he or she only needs to put a dead frog into a emptied coconut shell and strike the coconut shell repeatedly.

Same with all other black magic, if a practitioner fails to pass down her Penanggal to another person, this Penanggal will go wild and disturb innocent folks in the vicinity. A friend of mine told me that there is a distinction between a ‘Penanggal’ and ‘Menanggal’. Legend has it that a Menanggal also originated from a witch. This witch will apply a type of oil onto her body while reciting certain mantras to enable batlike wings to produce and her body to be separated at her waist level.

The practice of Thai Phi Phop will achieve similar results and the practitioner is said to be able to live until the end of the time by drinking lime juice and chanting mantras for 3 years. On the other hand, the Vietnamese Malai Ngai is mainly meant to harm and it is very difficult to control and feeds on animal intestines and eggs.
Posted by Unknown at 9:19 PM