What Is That Thing Behind You? (背后的东东) 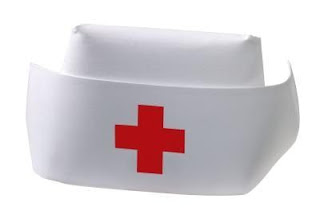 Nurses, for your own good, put on your hat please!

A nurse’s cap just like a police officer’s hat is believed to contain power to ward off spirits. People believe these items possess ‘royal aura’ (皇气) and it is precisely this ‘royal aura’ that the spirits are scared of. So, theoretically if a nurse keeps her hat during her duties, then there is absolutely no possibility for her to be possessed…

However, at times a nurse may have forgotten her hat especially during her night duties. As usual, life is always a little slack at night compared to day time and many nurses would prefer not to wear the nurse’s hat for convenience and Fiona is just one of those ladies.

That night was just as any other night and it was just passed midnight and Fiona was sitting at the nurse’s counter alone. There was practically nothing to do so she plugged off her nurse’s hat and leaned face down to get a short nap. After a while, Fiona felt that the environment was excessively chilling and cold breeze continued to blow at her right ear.

Reluctantly she opened her eyes and turned her head towards the direction of the breeze. She thought it was Dr Tan playing pranks on her. Well, this is not the first time the doc done such a trick on nurses taking naps. But there was not a single soul and the good doc was not in site.

Fiona looked at her watch and it was approaching 2 am, it was time for her to make her rounds. So she walked into Ward 3B. As Fiona was about to walk into the ward, one of her patient, Aunty Lim suddenly called Fiona:

“Who is the person in white following at your back, missy?”

Fiona stunned for a second and said:

“It is probably Ah Pek who likes to play pranks on people.”

“Oh I see…” Aunty Lim nodded and continued with her slumber.

After exiting Ward 3B, Fiona went into Ward 3C. As soon as her left foot just stepped over the brim of 3C entrance, the voice of Ah Pek was heard from his sickbed:

“Who are you bringing with you at your back, missy?”

“Don’t talk nonsense! Who can I bring in the dead of the night?”

“I saw there are two white shadows at your back!”

“They are just patients who returned from toilet!”

So Fiona completed her round after coming out from Ward 3G. As she walking towards the nurse’s station; Dr Tan was at her back and he shouted:

“Hey, Fiona! Who are those patients you bring into your ward!?”

Fiona turned her back, screamed out loud and fainted. At this point, the good doc said: “Hmm… I didn’t know that I was that ugly?”

Later, Fiona visited me and she said that she saw a group of people with very pale faces attached to her back when she turned her head. So I told her:

“Had you kept your nurse’s hat, you would have seen what you shouldn’t!”