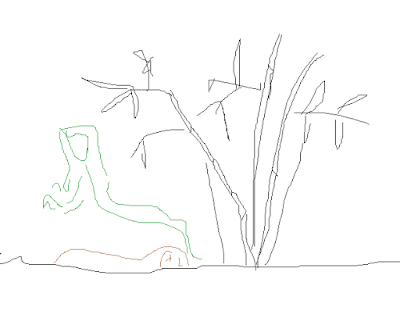 Bamboo green ghost is the most feared ghosts among the Chinese...

The bamboo green ghost (BG ghost in short) is a type of ghost similar to the formidable banana spirit (香蕉精) or phi phop. The difference lies in the media this ghost likes to possess. While phi phop and banana spirit like to attach to wild banana plant, BG ghosts like to dwell within the hollow sections of green bamboo stems.

Though mostly talked about, BG ghosts are largely unknown to general folks. So, let us explore briefly on this type of formidable ghosts just for fun. It is not likely anyone will come across this type of spirits and be harmed by them in this modern time. Then and again, we will never know.

There are two types of BG ghosts, the first one is the spirit of a person let to die slowly and in agony under an old bamboo bush.

Maoshan sorcerers believe that if a person has suffered from slow and tragic death under a bamboo bush, his soul will eventually attached to one of the bamboo stems. As time goes by, this ghost absorbs the energy of sun and moon and nutrients supplied by the bamboo plant.

Due to the influence of bamboo plant, this human spirit gradually developed into what we know as a 'bamboo green ghost' after 3 years or so if the bamboo plants are not disturbed during the duration. Of course, the longer the ghost stays in the bamboo bush; the more powerful it becomes.

In normal circumstances, BG ghost is thought to be 'matured' and powerful enough to move away from the bamboo after 10 years or so to seek revenge. It can travel with the wind and attach itself to human or animals. But most of the time, BG ghosts will try to find a plant host so that they can feed and rest.

Unlike common ghosts, BG ghosts can travel under broad daylight but they are most active during gloomy days or after 4pm. A female bamboo green ghost is much more powerful than the male due to the 'yin' characteristic of female energy.

The aim of a sorcerer to become a bamboo green ghost is mainly for revenge. Interestingly speaking the Maoshan BG ghost ritual is almost similar to the Middle Eastern Iblis conjuration ritual and in some way, bamboo ghost formation also similar to the Indochinese phi phop ritual except the practice is a little scary.

In order to become half-human and half-ghost creature, a sorcerer must have access to dead bodies. In old days, corpses are temporarily put in a holding area awaiting for auspicious timing to be buried. So it wasn't a problem then. It would be very difficult to perform this bamboo green ghost ritual nowadays unless a sorcerer has the access to morgue.

When a corpse is filled into a coffin and left in a holding area, the sorcerer will start to lie underneath the coffin to absorb the corpse nutrients as the dead body decays. He must also find a section of green bamboo about 3 feet and hold the bamboo stem as he lied face up under the coffin. This bamboo is to contain the deceased's soul.

This exercise must be done for 49 nights or the ritual will not work. So, after 49 days and the dead soul is captured inside the bamboo in addition to the sorcerer too would have fully charged with corpse energy, he can start stage two of the ritual.

For the second part, one end of the bamboo is wrapped with a piece of red cloth while the other end is buried into the ground. This can be done in the sorcerer's own garden or somewhere in the wilderness where he will not be disturbed.

Then for another 100 days or so, this sorcerer must meditate in front of the bamboo stem until the red cloth that covers the top became punctured by a blob of green smoke. This is the resultant magically empowered bamboo green ghost. Now this ghost can be ordered to possess the sorcerer and unite with his soul.

The full union of ghost and human can take anytime between 3 years to 10 years or so. It is believed that upon successful completion of bamboo green ghost ritual, the sorcerer can live until the end of time similar to iblis or phi phop.

I know the bamboo green ritual for becoming the formidable spirit and the summoning of the natural born bamboo green ghosts to do my bidding. Frankly, I have not made use any of them as I found that other rituals are more 'user friendly' and much more powerful without side effects. The above ritual is of course, already forgotten in time and only serves as our reading pleasure only.