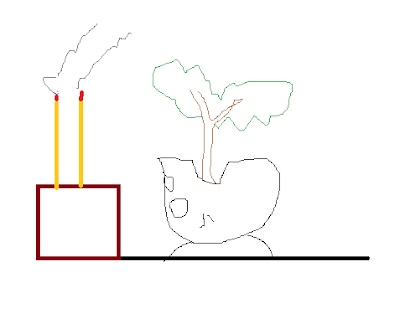 If you have tired of ordinary bonsai, try this one and you will be surprised...

So far I have only seen a few real specimens of this special bonsai in the secret altar of a sorcerer in Vietnam but this method can be traced from Song Dynasty. There is a description that instead of bonsai plants, beans of 5 colors should be planted in a skull collected in the wild. I believe this is the predecessor of Vietnamese Ngai magic but more studies should be done and this will be another interesting comparison.

This skull with beans should be kept in a shady spot in the house until it started to grow. If the ritual is successful then the beans will germinate and grow with minimum sun light. Incenses and food offerings should be given to the skull and seedlings twice a day.

It is best to vacate a small room specifically just for this skull based bonsai as this specific bonsai will give rise of a type of very fierce spirit that cannot be worshiped together. I was lucky enough to visit another very rich Vietnamese of Chinese descendant who has a special room just for skull bonsai. No one except the owner was allowed inside, children were especially forbidden to play close to it in the fear of their weak souls being attacked and devoured by the skull bonsai spirit.

I was fortunate enough to be introduced to this skull bonsai while I performed Feng Shui audit for the house owner, Mr. Anh Dung. According to Anh Dung, this skull bonsai must be fed with an egg twice a month: once on the 2nd day and the other on the 14th day of Lunar Months. Whenever Anh Dung has any unresolved problems, he would enter the room and meditate in front of the skull bonsai to get guidance. Up until then, the skull bonsai has never disappoint him.

Anh Dung also admits that his grandpa owned fairly big business in old China before the civil war during the end of 1940s. His grandparents fled to Hanoi, Vietnam in early 50's penniless. An old Vietnamese taught Anh Dong's grandpa to perform this skull bonsai ritual and fortunately with half faith, the old man followed the Vietnamese's advise and the luck of Anh Dung family took a sudden change until they started to do import and export business and became millionaires.

When I met Anh Dung, he was the only one left behind to look after the family business and this special skull bonsai. All his relatives and sisters have migrated to either USA or Europe. Perhaps it is Anh Dung's wish to spend the remainder of his life with this eerie heirloom skull bonsai but I didn't venture to ask him.

So, if you want to get rich, then try this special human skull bonsai! Don't take my words for it as the risks are all yours!