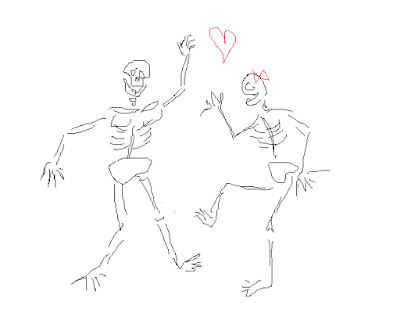 Believe it or not? When you have a little too many human skeletons around, they will start to socialize around...

In the early 80's and probably up till very recently until eBay started to ban the selling of 'human parts', human skull can fetch up to USD1,000 and a set of complete human skeleton can go up to USD2,500 and more.

So while others are afraid of those spooky human remains, there are people who actually collect them either for black magic purposes or to resale them as precious commodity. Nowadays of course such trade is overtaken by smart phones and some other electronic gadgets.

I have told you the story of 5-ghosts created havoc in my Kelantan friend's shop which burnt down half of his shop. Now another friend of mine who also stayed in Kelantan near Malaysian - Thai border collected human remains for trade and this person was Uncle Sam.

Uncle Sam initially worked as a grave digger but when he learnt of the value of human skeletons, he started to dig up bones from those abandoned graves around his area. Gradually he employed other village folks to do the job or buy from others instead.

Needless to say, Uncle Sam has many human skeletons stacked in his house waiting to be sold. He has no problem to stay with these valuable commodity as most of these human remains would change hands fairly quickly too and the profit margin was extremely high too.

I visited Uncle Sam on one occasion on the request of a friend who wanted to purchase human skulls for his 5-ghosts practice. We arrived at Uncle Sam's place in a sunny March morning. Though outside was hot, it was relatively chilly inside Uncle Sam's house. There was a mist like aura filled the entire house, I didn't like it but had to go in with my pal anyway.

Uncle Sam greeted us and he immediately brought us to his human skeleton stock. There were around 15 to 20 skeletons laid quietly on the floor. While my pal squatted down to inspect the human remains, Uncle Sam and I started to chat.

"I can see that you must be pretty lonely with these bones Uncle Sam!" I jokingly said.

Uncle Sam: "Oh, just to earn a living... But you are wrong my friend! Those skeletons will come to life at night to socialize, fight and even making love if you believe me? In fact, I don't stay here. I will leave once you guys left."

I was curious and hinted Uncle Sam to continue. Perhaps that has triggered his long hidden urge to tell stories, Uncle Sam said:

"Young man (then, not now), I have eaten more salt than you ate rice... Human souls will remain in their bones long after they have passed away, that's the reason why you sorcerers are so fond of using real human bones...

All of these bones you see in front of you must be fumigated with benzoin smoke everyday as their food or else they will make noise. Once my nephew passed through this house at night when I went away for a few days, he heard sounds of bones cracking as if many pieces of bones were hitting each other.

Fearing that bugler had broken in, he peeped through the seems of the window to investigate. Instead to his shock, he saw though it was quite dim in the house, the whiteness of the bone was quite outstanding in the dark.

My nephew was so scared that he quickly ran home and he fell sick the very next day. I learnt about the story from my brother when I returned from outstation..."

I became speechless for a moment then I blurred out: "Why don't you get rid of them as they cannot be kept in the house?"

"Are you kidding son!? They worth a lot of money to me!" Uncle Sam exclaimed.

I immediately shrugged and shut up when it comes to money matters. We left Uncle Sam's place after my pal has made his purchased.

A few years later, I returned to Uncle Sam's place but the caretaker became another person. According to the new landlord, he was Uncle Sam's nephew who just taken over his uncle's old house. Uncle Sam has passed away one year back, unfortunately his remains were dug out by some `tomb raiders' and his grave was empty when he visited his uncle's grave.

Perhaps Uncle Sam's skeleton has fallen into some magician's hands or perhaps it is still dancing somewhere with its newfound skeleton girlfriend? Only God knows...