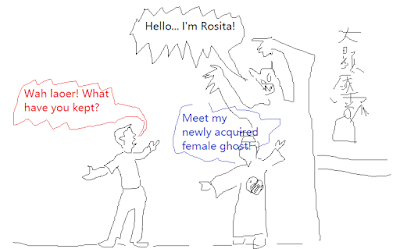 When I saw my pal's newly acquired female ghost...


Believe it or not, our modern time has indeed proven a great challenge to Taoists and Maoshan practitioners?

Maoshan as we all know refers to a group of sorcerers specialized in ghost magic and this type of magic was quite prevalent in the Southern and Southwestern part of China until Chinese migrants brought it overseas.

I have no doubt of its efficacy in dealing with ghosts in general as I myself had been involving in Maoshan ghost magic for quite sometime. That statement refers to the old Chinese environment of course. I abandoned Maoshan magic due to its limitations in dealing with more powerful spirits...

So said, there are still a lot of Maoshan fans out there unaware of the weakness of Maoshan and they continue to engage in this type of sorcery. Of course, not many people retain pure Maoshan practice nowadays frankly said.

My Maoshan brother, Chong was once quite famous in Northern Peninsular and he traveled throughout the country to perform exorcism rituals. His way of exorcism uses his familiar spirits, i.e. ghosts. So while Chong was called to tasks, as he exorcises ghosts; he too will bind some more powerful ones as his ghostly servants.

All went well until one day Chong was called down to Johor Bahru to perform a space cleaning ritual for an ex-church.

The said former church was located on the 3rd floor of a business building. The missionary found a better place and decided to vacate the place on the expiration of tenancy contract. The owner took back the floor as he wanted to rent it to an hotel owner, John.

Soon after John has taken over the place, he renovated it and converted it to worker's hostel for his foreign employees.

Strange things started to happen very soon after John's workers moved into the new place. People were reported to be attacked at night and most of them experienced wet dreams. According to John, his workers told him that a pretty white lady introduced herself as Rosita visited his workers one after another every night until those workers became so frighten to return to their hostel.

Having no clue as what has happened, John contacted his landlord, Mike and Mike in turn called Chong for help.

Chong thought it was just another normal duty call, so he did a casual packing and brought along his 5-ghosts. He arrived the place quite late and that was normal to perform exorcism rituals at night as this is the time when ghosts are believed to be most active.

All went well and by 11 o'clock Chong has finished his job and he called me so that he could put up with me for a night. I was in Johor Bahru then and since I was renting a place in Pelangi Garden.

We had supper together and Chong told me of his newly acquired an 'imported' white female ghost, Rosita. According to Chong that his Rosita is the most powerful ghost that he has seen so far in the field.

I was interested to see this Rosita but Chong asked me to visit his house in Kedah as he will need to attune with this foreign ghost first before releasing her to my inspection. My intention was only to see if Maoshan magic works on 'guai lou' (鬼佬) too.

Two months later, I received a call from Chong and he was eager to show off his Rosita to me. So happened that I have to return to Penang for a business dealing, I purposely drop by Chong's place and spent a night there.

Right at 12 midnight, Chong took out a small coffin said to have contained Rosita inside. So I sat quietly in a corner to observe Rosita in action. After Chong removed the seal and opened the cover, he murmured some mantra and a black mist rose from the coffin...

"Wah lau eh! What the fxxk is that!?" I jumped up from my chair.

Chong was quite annoyed but he tried to say calmly: "Can't you see this beautiful blonde fair lady ghost!?"

"Com'on man! That was no pretty blonde ghost! It is the Devil itself!" I tried to make some senses out of Chong and continued: "What I saw is a horned creature with sharp fangs, bulging red eyes and it is about 10 feet tall!"

Apparently Chong wasn't very pleased and I sensed his displease and I thought I better shut up and let Chong finish what he wanted to do.

Perhaps Chong was not in his mood after the commotion I made in his altar, he summoned Rosita into the small coffin and closed the cover. However I saw the opposite happened. Not only Rosita did not enter the small coffin as ordered, it kind of stuck to Chong's back as if his shadow.

Since the creature didn't threaten me, I just pretend that I did not see anything. After all, there is no point to talk to Chong anymore because he is already obsessed.

I left Chong in the morning and advised him to be careful but he just brushed off my advice as he was quite confident about his power over spirits.

About three days later, Chong's wife, Helen called me apparently in a state of panic: "Liew, can you help Chong. Chong said Rosita wanted to take him for a very long ride. And, Rosita has opened a portal to enable legions of armies into the house..."

The phone call was interrupted and I tried to call back but there was no answer. There was nothing I could do.

A few days later after that, I met Bob who was one of Chong's student. Bob told me that Chong has gone mad, he tried to attack his wife and set fire in his altar. Luckily Helen was in time to call the help of neighbors and volunteer firefighter. He said Chong was later sent to mental asylum for a few months. That was the last time I heard of Chong.

Perhaps Rosita is still roaming in our human realm? And what happened to the 'portal' and legions of satanic forces? That remains to be answered. Unfortunately I have no answer for you. One thing is for sure, Maoshan magic is already out of place in this modern world.