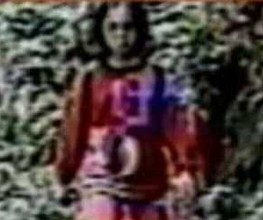 It was in the beginning of March, 1998 when a family visited Da Keng scenic area in Taichung. One of the family members took some video recording. Coincidentally and unfortunately, a family member passed away.

During the funeral service, someone remembered the video shooting and he played the video and found an eerie figure followed behind those folks. It was a mysterious girl like figure wearing red shirt. The 'thing' showed a grimed greenish face. Interestingly, the girl's eyes could not be seen clearly as they are overcast by shadow.

Surprisingly, no one could remember that they have seen this child. Coincidentally too, in the video clip, fang like substances were seen inside the deceased's mouth. The most disturbing of all is that red shirt child however.

The video clip was passed to a local TV station and it was being broadcast in a supernatural program...

Not long after that, someone contacted the paranormal program host and claimed to have seen the red shirt kid. Since his encounter, his business took a downhill turn and he even met with several accidents that almost took his life.

At the moment of despair, this person watched the paranormal program and he ventured to contact the program host for help.

The program host was happy to assist. So, the host inquired some local folks around Da Keng if anyone has seen the red shirt girl but the answer was negative.

Those who have seen the bizarre video clip felt though the figure looked like a kid, its face somehow resembles a very pale old man.

After some twist and turns, the program host employed a very powerful Taoist master in the hope to solve this mystery. So, together with the related party and the Taoist master, they went to the place of incident.

At that juncture, the Taoist master made some hand gesture and the wind halted. After some ritual, the Taoist master claimed that the red shirt girl was being captured inside an egg. When the master broke the egg shell in a river, the egg white was black in color...

Many folks believed that the red shirt girl was in fact some kind of mountain spirit. It was say that a movie directed made a movie titled 'Tag Along'and won some prize.

Some scientific minded people looked at the video clip and deducted that the kid was other innocent folk followed at the back of the family. Due to optical illusion and the angle of the shooting, an old man may look like a kid when viewed from a higher elevation.

So, there is no mystery after all but coincidence. Maybe the saying is true: "沿海居民多迷信" (Those live near the sea tend to be superstitious). People in Hong Kong, Taiwan, Malaysia and Singapore tend to believe in spooks more than others.