Debunking The Myth of Whirlwind (揭穿旋风的迷思) 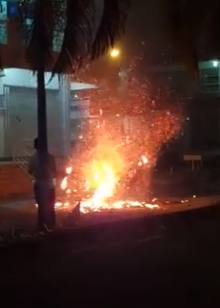 We often see small whirlwind produced when joss papers are burnt to appease spirits. We see this a lot during the Chinese Ghost Months. People believe that this is because the 'Ghost King' is present and wandering ghosts are fighting with each other to get the offerings...

Scientifically, the whirlwind is actually a physical phenomenon caused by air movements:

When the papers are burning, air in around the fire is heated and expanded. Heated air rises up while cold air descends. This produces air flow or otherwise 'wind'.

When wind is produced, small and light objects such as ashes will be lifted in a spiral motion. The theory behind formation of whirlwind is same as tornado. When the oceanic cold and hot current meet, the space above ocean experiences air convection that results in tornado.

Comparatively speaking, this phenomenon is same as the explosion of an atomic bomb. Gigantic flow of hot air suddenly ascends and encounters the cold air above and then experiences a quick descend. The center of atomic explosion again causes hot air to continue to ascend. Hence forming a few circles of mushroom cloud.

Although we say that the other end of science is religion... This does not also mean that when some superstitious folks started a bonfire that causes a small whirlwind accompanied with seemingly human like light images, or the rises and falls of paper ashes as ghosts are collecting the hell money.

Sorry to debunk this myth but I just must put things right or things like the below will continue to happen: 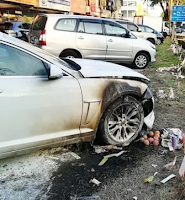 A car was partly burnt down due to people burning joss papers by roadsides. Just to clarify... the car is not part of road side offering... It is a SGD190k luxury car!