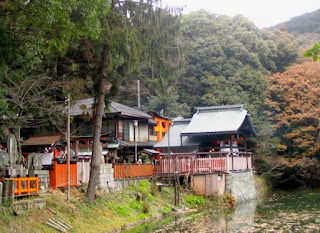 The lake near Fushimi Inari-taisha is said to be the most dangerous and mysterious place.

Visiting a Japanese Shinto shrine or ‘yamatojinja’ is a must itinerary. But before you proceed with the journey, let me tell you some bizarre stories about these mysterious shrines; and you would know what realms you have ventured into…

The first story is not very scary. The incident happened at famous Fushimi Inari-taisha (伏見稻荷大社). A friend of mine went to attend a worship ceremony. It was quite late in the evening after the ceremony. The sun was setting and this friend of mine suddenly found he has lost his way. Since my pal is not a local, he was in quite a hurry to get home. As we always say: “whatever will go wrong, will go wrong.”

When he came to a junction, he has unfortunately chosen the wrong road. As he was walking; suddenly he heard the voice of an old man telling him that he has gone the wrong way. The voice further gave him instruction on how to get back to his car. Having no option, my pal followed the old man’s voice and indeed, very soon; he found his way and his car. My friend was overjoyed and he turned his back to thank the old man only to find there was no one there!

Later, my friend stopped by a local restaurant and the lady owner told him that it was perhaps the fox spirit of the shrine that has landed a helping hand.

Anyway, just a word of caution, it is best to visit a shrine with Inari fox spirits during day time. If you venture into the shrine after dark, then all risks are yours!

It is believed that the most ‘dangerous’ place is actually the lake. There are people continued to be ‘lost in other realm’ and these unfortunate folks would get lost for apparent no reasons when they venture near the lake. So the locals said the best way to enjoy the beautiful lake scenery is just to watch it from afar.

A local told me that the above stories are true because if one’s aura is not in sync with the Yamatojinja, then it is best not get near the place. This is because gods of a Shinto shrine is very different from the Buddha and bodhisattvas of a Buddhist temple. The Buddha and bodhisattvas are compassionate; they will turn a blind eye if a person made a mistake. However, the spirits of a Shinto shrine can slaughter a person directly and mercilessly!

Yuki said that her aunt once wished to visit the Inari shrine but no matter how long she walked she could never see the end of the road. At the end, she had to give up. As her aunt recalled later, the road in front of her kept changing and finally she had to give up.

Having said so, please don’t let my words scare you; do drop in and enjoy the beautiful scenery. I do believe that there are no scary tales that can deter an enthusiastic tourist!
Posted by Unknown at 10:39 PM