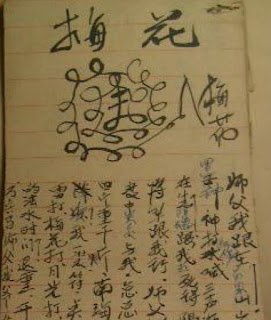 The manual I got from a descendent of a raft cult member which shows the practice of 'plum flower plum' (梅花掌). Plum flower palm is one of aggressive magic practised by raft cult members. When a person is being hit by 'plum flower', his/her external sign is a series of small holes forming the pattern of plum flower on the skin. In each of these small holes, there is one fine needles. If the person is not treated in a proper way to force out the needles, a person can die in short time. There is an old story behind this plum flower...

Raft cult originates from ancient Hunan (湖南), China. Some scholars attribute this cult to be a subset of Plum Mountain Cult (梅山教). Raft cult is believed to be practiced by raft workers since ancient time due to the need to transfer logs from upstream to downstream. Now days with the advent of modern transport technology, many raft workers lost their jobs and raft cult also gradually being forgotten by others. Perhaps at the time of writing, there is no more raft cult members around.

This cult is believed to begin in Xiangxi (湘西) mountainous regions where the cult members worked in logging business to earn a living. After they cut down trees, the logs are tied into a big platoon. And these platoons were let drifted in the river flow so that they are carried by the water to downstream where current Dongting Lake (洞庭湖) is.

Unlike modern logging professions that just throw logs into river, raft workers stay on the wooden platoons to guide and watch over their merchandise. We can perhaps imagine what type of environments these workers were facing on the harsh river and weather environment. Due to the influences of the working environment, raft workers learnt many potent magic rituals to protect themselves from nature forces, evil spirits and thugs alike. Gradually a cult with its own characteristics was formed.

The grandmaster of raft cult is believed to be Master Chen Silong (陈四龙). The master was a chivalric person, he was said to have taken care of the water route around Dongting Lake by removing reefs and monsters. Master Chen also taught the raft workers to set up big drum and oars on the wooden platoon. The drum was to be beaten during releasing of platoons into the water while oars to guide the platoons. As such, a set of rituals specific to platoon activities were formed.

Interestingly, the raft cult does not appoint a master and everything is managed by a raft supervisor. He is also the leader of the platoon workers. Because of the fact that raft workers’ life was precarious, raft workers were trained to be fierce and easily provoked. The workers trusted their supervisors with almost blind faith. As such, the raft cult members have great cohesive force. A telltale sign if a person is a raft cult member is that he would have a tablet worshipping the ‘grandmaster of platoon drum and oar’ (排鼓橹祖师神位).