A Discourse With Kings Of Hell 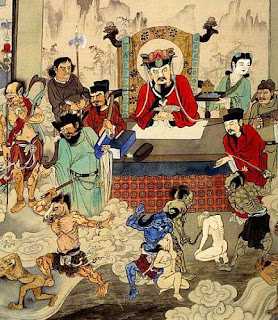 In Taoist believe, there are ten offices of kings of hell. These kings have the service of two noticeable generals: the horse head general and the cow head general. The ten kings are the most feared deities in Taoist believe and this can be shown by a Chinese proverb “if the king of hell wanted a person to die at 3am, no one dares to keep the person till 5am.”


The Taoist king of hells worship is believed to be originated from the influence of Buddhism; that in turn has rooted from the Yama believe of Hinduism. In Tibeten Buddhism, the Yama Rajas are worshipped as the Dharmapala of Yamantaka, a wrathful emanation of the wisdom boddhittsatva, Manjusri. The famous Yamantaka Tantra is dedicated to the practice of Yamantaka and Yama Raja.


However high and mighty these kings of hell are, they and their officers can put under a Taoist’s service with the power of talismans. Below is a “soul catching” ritual collected from an old man from Batu Caves in Selangor, Malaysia. Let us examine the below ritual further:


3.      Empower this manikin and erect it in the center of your altar.


4.      Start chanting and burn soul catching talismans to pull the person’s soul into the manikin.


5.      This ritual is carried out for about 7 days. The tell tale sign that the soul is successfully captured is that one can sense slight vibration at the manikin.


6.      Get 7 pieces of long iron needles that had been dipped with white chicken blood and pierce on the manikin.


7.      The victim of such magic rite will feel a sudden pain in the chest and succumbed to pain.


Below is one of the many talismans used: 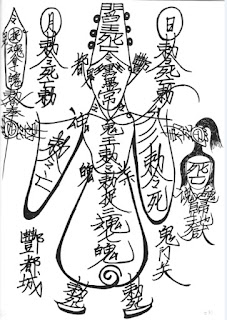 I have not personally tried the above ritual, just like to post here for your viewing pleasure. As before, if you have any of the success stories, kindly do so let me and let other visitors know.
Posted by Unknown at 12:05 AM