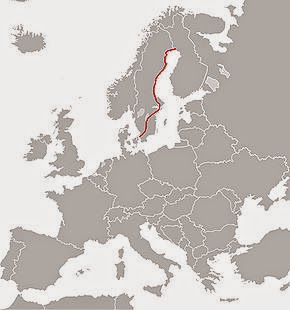 Many highways are thought to be haunted in this world, in Malaysia the Karak Highway is said to be notoriously haunted and accidents are caused by unrest spirits. It is interesting to learn that a European highway is also haunted. Below news clip is translated and shared by Mr. Bjerstedt:

Vættir are blamed for mysterious accidents on European route E4

On route E4 to the north of Gävle there has been many accidents through the years, especially around Skarvberget. When we investigated the matter closer we came upon stories about vættir, tomtar, trolls and spirits.

Skarvberget is the name of a place by E4 to the north of Gävle, about the same
hight as Björke. There's a rest stop right by the road.

The name often appear in connection with traffic accidents on E4. In the archives we find reports of 59 different incidents and accidents at or near Skarvberget, since 2000. The dark figure is higher because not all the accidents have been reported.

If you look at E4 to the north of Gävle as a whole, not only by Skarvberget, it has been a route where many serious accidents have occurred. The route between Gävle and Axmartavlan was called The Road of Death.

When we tried to find out why the route by Skarvberget is so accident prone, we heard strange stories.

Gabriella Gulliksson at the Transport Administration says that the route in recent years has been spared from death or accidents resulting in serious injuries. But it happens a lot at Skarvberget.

- This stretch stands out slightly, along with some other places and distances
along the E4, when it comes to events, jams, incidents and accidents without
injuries.

When the E4 which was converted into a so-called 2+1 road, ie collision-free
path where it varies between one and two lanes, it was one of the first 2+1
roads of its kind. It can matter, think Gabriella Gulliksson.

The Overtaking fields in this 2+1 road is slightly shorter than what is built today when building new 2+1 roads, she says. Another explanation Gabriella Gulliksson believes may be that the road is cambered in an old fashioned way. Roads are angled, cambered, in a certain way so that rainwater will run off them. But there's also other explanations. For a long time, it has been said in the area that the construction of E4 offended something in nature. Deep within the woods, that should have been left alone.

In news items about events at Skarvberget, things that seem strange are sometimes said. Three times vehicles have caught on fire while driving, just at the level of Skarvberget. Drivers who suffer sudden symptoms of illnesses at the same place are also mentioned. A lot of cars have been punctured or had technical problems right there.
Stig Edvinsson from Bergbyis has worked with traffic management for 30 years,
often together with the Swedish Transport Administration. He followed the road
construction and remember discussions about supernatural beings when the E4
north of Gävle was prospected in the 1980s.

At some meetings I attended in connection with the construction of the road, I learned that the Swedish Transport Administration had received quite a few letters in which it was asked "How the hell can you build a road over the place where the trolls live?". I have not seen the letters myself but they are supposed to have come from an old witch in the woods, he says.

The witch must have been worried that the trolls would become angry and disrupt traffic.

Another theory is that tomtar play tricks on the road and cause accidents. Marianne Lundqvist that worked as a journalist in Hamrånge heard about the tomtar.

- It was said that they shouldn't build there because then the tomtar will come.

It was said that the humans touched land that shouldn't be touched, Marianne
Lundqvist says. On sites and discussion forums on the internet it's talked about vittra instead, a people that like the vættir live under the ground, in stones or in old trees.
The freeway to the north of Gävle isn't liked by the vittror; hence all the accidents.

Krister Wimark has lived a long time in Hamrånge. He has heard many stories
about Skarvberget. Krister Wimark says that he lives with little people [trolls,
tomtar, etc] and what he calls “some kind of spirit” on his farm. He claims that
he has a connection to nature.

- There's enchanted areas up there in the woods. It would not surprise me if
there are secret documents of things that they encountered when they were
building the road. Maybe it was all about little people, I do not really know,
Krister says about Skarvberget.

He himself is sure, however, what makes cars crash so often on the E4. He believes in a kind of spirit: dead people who are still with us living ones (ghosts).

- It was a sanctuary before. Ancient fortifications and houses were built there. People had their lives there and worked and toiled, even before the Viking era. I think those who have lived there before are angry.

On Iceland, the authorities take into consideration what is sometimes called huldufólkið, the elves, when building roads and houses. Roads can sometimes take
an unexpected turn around what is said to be the elves houses.