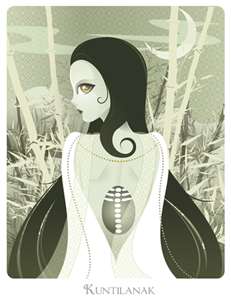 A Kuntilanak is the ghost of a woman die in giving birth. This is the Javanese version of Pontianak. As to which one is more fearsome, you tell me after trying out the below rituals J:

Below poem is said to be a mantra for conjuring a kuntilanak popularized by the film “Kuntilanak” star by Julia Estele. I am not going to elaborate in detail about the authenticity of this poem:

It can be translated roughly as below:

“During the night you start to shine.


Do not awaken from your slumber.


Be careful as not to show yourself.


I order you the jinn and Satan,


Do whatever you will,


But do not bring about death.”

I do think this is a good pass time if you and your girlfriend have run out of ideas of what to do during your date and wanted some element of horror for cooling down during a summer night, then do the following:

·         Go to a known haunted place preferable a place such as cemetery with huge ancient trees.

I guarantee that you will have an unforgettable night! (At your own risks, of course)

By the way, you may also be interested in the below link:

Email ThisBlogThis!Share to TwitterShare to FacebookShare to Pinterest
Labels: kejawen