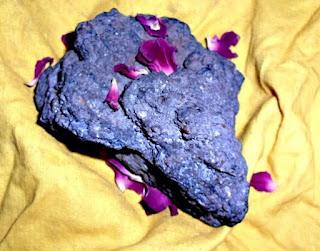 "Tahi Besi" or iron rust is normally buried in the "Tiang Sri" or the sri pole. 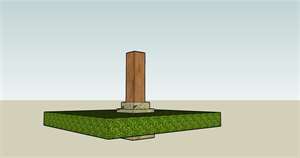 "Tiang Seri" is the main pole of a house. It is believed that this is where the "Semangat Rumah" or spirit of the house is dwelled.

The old Malays used to follow certain rules in building new houses, opening new land and etc. There are some resemblances with the Chinese Feng Shui practice.

It is believed that before building new houses, building or even opening a new field, the best land is of greenish yellow colour with a little of fragrance and must also be fertile.

The location of the land is also an important consideration. The best land is the land that is flat on its northern corner and high on its southern corner. It is believed that land with such a characteristic will be able to give security to its owner.

If such a land is indeed found, this place will be cleared. After that, 4 pieces of wood will be erected on the land in the formation of a square. During the pole erection process, the names of earth spirit will be called.  Then a pile of earth will be dig at the centre of this square while reciting the below mantra:


Who dwell in the four corners of the world,


I crave this plot as a boon)

After that, the intention of owning the land is expressed and then the below mantra:

(If it is good, show me a good omen

Then the pile of earth collected just now will be wrapped with a piece of white cloth and fumigated with benzoic incense. This package will be put under the pillow and sleep on it.

Prior to sleep, below mantra will be recited to request an omen:

Dreams during the sleep will give an indication if the land is fortune or otherwise.


If no good omen is obtained, then the land will be abandoned.

Once good omen is obtained, and then an auspicious date and time for clearing the land will be chosen. The standard time to start work is 7am but it will be up to the preference of the Bomoh.

The land clearing begins with construction of a small hut in the centre of the land. While digging main hole for constructing the hut, the Bomoh will recite specific mantras. During this process, the most important taboo that must be observed is no shadows must be cast into the hole. If this taboo is broken, then people will fall sick.


Following the completion of hole digging activities, a sacrificial ritual will be held where a pair of brazilwood, ebony, inggu herbs and iron rust is put into the holes. Then a goat is slaughtered and its blood is used to drip into the hole. The purpose of this sacrificial ritual is to pacify the earth gnome. After that the head and legs of the goat will be thrown into the main hole. This main hole will house the “tiang seri” or the house main pole. After that, the landlord will put on a ring to his little finger and say “akan membujok jembalang itu” (will persuade the gnome) repeatedly while erecting the pole. (May be this is the origin of the belief that the main poles of old houses are haunted.)

While erecting the “tiang seri”, the Bomoh will also recite the below mantra:


Thou art sons of Bhattara Guru,


I know the origin from which you sprung


From the flashing lightning,


I know the origin from which you sprung


From the morning ray,


Retire ye hence to the depths of the sea,


Unite with my body you and me,


The parts originated from Adam)

Only after going through this process, other part of the house can be built safely.

Direction of the door

The direction that the house's door faces is also said to play a part in determining the occupants' well-being. The worst direction for the door to face is south, which brings bad career luck. A door which faces the west is said to bring knowledge or encourages the coming of someone well-learned, especially in matters of religion. A door that faces east ensures many grandchildren and a life of tranquillity. A north-facing door brings wealth.

Hmm.. Now I am a little dizzy just typing the mantras J!
Posted by Unknown at 3:24 AM