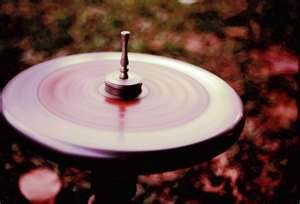 Spintop is a toy, but not the one that is made of a skull...
Many areas in Indonesia have unique magical practices. In Minangkabau there is a type of magic using a type of gasiang commonly used as a medium to hurt and harm others magically although this type of science can also be used for other purposes such as the treatment. A “Gasiang Tangkurak” is a type of gasiang shape similar to flattened zinc, but the material of the human skull.

Gasiang like this can only be played by the shaman, or a person who has the magical ability. A shaman will recite mantras while twisting a gasiang. At the same time, people targeted will feel the pain, anxiety and act like a mentally ill person.

For example, a victim may be screaming, pulling hair, and the most popular-climbing wall. This work is usually done at night. When the shaman has affected his/her victim, then the victim will go see the shaman or the requester. Amongst the contents of the shaman spells would sound like this: if the victim is sleeping, then he is told to wake up, if the person is sitting, then he is told to stand up, if he is seated then he is asked to run to see someone. Magical disease caused by a Gasing Tangkurak is commonly called Sijundai.

If a Gasing Tangkurak is used to cause disease or sijundai, it is grouped under black magic as the devil is employed to do the biddings. This type of black magic was widely circulated amongst the Minangkabau people in rural areas in general. This example can be referenced to the popularity of the song's creation Gasiang Tangkurak Syahrul Tarun Yusuf sung by Elly Kasim, a legendary Minang singer.

Gasiang Tangkurak spell is usually used for revenge. Someone came to the shaman to hurt someone with a fee. Price measures that are commonly used are gold. As a condition of treatment, usually a shaman asked certain amount of gold as a sign, not wages. This sign will be returned if the shaman failed in their duty. But if he succeeds, then the money sign is taken, and the applicant must supplement it with fees.

In addition to harm, there are certain shamans who use Gasiang Tangkurak to treat diseases caused by magical working. Other than that, a Gasiang Tangkurak is often used as a medium for attracting others to become interested in us. This type of spell is called Pitunang.

As the name implies, the main ingredient of Gasiang Tangkurak is the human skull from the dead. This type of Gasiang can only be made by people who have a certain inner knowledge. In many areas there are some differences regarding the unusual skull material and is best used as a Gasiang Tangkurak. In some areas, it is common to use a skull from person died of untimely death or by bleeding.

While in another area, ​​the skulls of those occult practitioners are used particularly for treatment purposes, while in another area shamans believe that the skull of the woman who died in childbirth is the best material. Even in certain areas, an informant said that the best skull is the skull of the kids that have been prepared since childhood. The boy was taken to a solitary place, and then beheaded. This bloody skull will then be used as the main material for creating Gasiang Tangkurak.

The useful part of the skull is the forehead. On the day the bodies were buried, the shaman will go to the grave. He will dig the grave and taken the corpse. The forehead part of the skull was taken, as is believed that the magical power of man lies dead is congregated at his area. The part taken is not too big, it is only about 2cm X 4 cm. The shaman will recite specific mantras while calling the name of the dead during the process of taking a corpse’s skull, shaman spell specifically citing the name of the corpse.

Once taken, the forehead will be drilled two holes in the middle. The best time to make the holes is when there are people who died in the village where Gasiang makers reside. This is the time that it is believed to further empower the magical power of Gasiang. Then the pincono yarn or thread of 7 colors will be put thought the holes. This Gasiang and yarns were then empowered with special mantras. This type of Gasiang will then be used to hurt people.

There is another type of Gasiang, with similiar function to the Gasiang Tingkurak. Gasiang Puruik is made of lime (Citrus hystrix) from the male type and it is rather large. The mantras are recited at that lime. Kaffir lime is placed on a large rock, and then squeezed with another large stone. The stone should be in the open sunlit from morning until evening. Before squeezed the stone, read the spell. Then allow the limes to dry completely, after which a hole is made in the middle. Pincono thread or threads of 7 colors is then passed through the hole.

This type of Gasiang is usually used for very minor problems and treatments. The timing in using of this Gasiang is in accordance to a calculation based on certain calendar timing. In the interest of young people, is a commonly use Zahrah time, whereas for others the treatment done at Syamsu. If is for good cause, no restrictions when using Gasiang. But to the wicked, then the user should avoid all things related to the Lord should be avoided.
Posted by Unknown at 7:48 AM