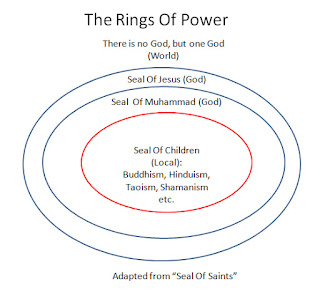 My view of a universal conjuration model﻿
A question asked: “Can we have a mixed-mode magical system?”

A mixed-mode system is a New Age product: for example in some New Age occult books we can see people conjuring Kali, Hecate, Fudo Myo-o, Taoist gods and goddess all in one go.

My view is that it is indeed possible: I use a layering method but I won’t actually mix all the systems together. For example: I would invoke Solomon spirits in one setting, after that I would invoke the Thai, Taoist or Tantric deities in the following setting.

If you still remember the “ring of power” diagram?

Okay. I make used of a “triple cycle technique”:

My first two cycles of conjuration only act as “controls” for the third and final conjuration.

In a triple cycle conjuration technique, no spirits can have any funny business with a conjuror as they are being watch over by powerful Archangels of God. But then and again, even Archangels do trial the boundary of a conjuror. So one must also be on guard with what he/she has learnt. The Divine power is actually quite harsh to the weak ones; those who have tempted the boundaries of Angelic energy will understand what I have just said.
Posted by Unknown at 7:54 AM

Email ThisBlogThis!Share to TwitterShare to FacebookShare to Pinterest
Labels: Question And Answer