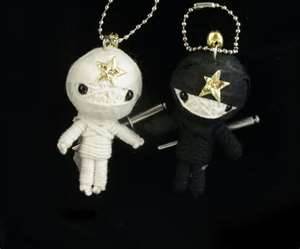 Cute dolls that can kill!﻿
Just as I am running dry on ideas to write, Mr. Ong sent me two very interesting stories about puppet magic. So when you are reading the stories, please also help me to thank Mr. Ong for his time and contributions. Below are the unabridged versions of the stories:

Texas conjures man Rev. Gary Fox once told me the following method of killing a man with voodoo. This is what he said:

“This trick works at a distance. On the change of the moon, get yourself a newspaper and cut out the shape of a person. Write the name of the person you want to kill on the paper using a red pen. Then stick a brass pin in the image, drive it straight through the head.

After that, get yourself a small box, like a cigar box, and lay the man out like he is in a coffin. When the sun is going down dig a hole in the cemetery and bury the box. Your victim will surely die. They'll go down with the sun.”

Rev. Gary Fox said you only want to use this on a sworn enemy. “Too many people today,” he said, “lay curses on people for the smallest slights. Someone looks at 'em funny and they hex 'em. I personally have never done that. It takes up too much of yo' time hating people like that.”


An acquaintance of mine, an occult bookseller and magical supplies retailer, for example claims to have proven that you don’t need to be a believer for a voodoo doll curse to work.

When I spoke to him a while back he asked not to be named. So I’ll refer to him as “Mike”. He also wanted me to make clear that he and his small staff are all Christians (somewhat unusual for a company that supplies books on magic and witchcraft paraphernalia, but refreshing in its eccentricity).

Anyway, some years ago Mike was talking about voodoo dolls and curses with one of his staff – who I’ll call “Phil”. Phil dismissed it as “all rubbish”.

“We had some Voodoo dolls in stock,” Mike told me, “so I took one out and wrote Phil’s name on the label and tied it around the doll’s neck. I then turned my back on Phil and stuck a pin in the doll and put it away in a drawer. I turned back to Phil and said, `Right, let’s see what happens’.”

At that point, Phil went upstairs to make a pot of tea for everyone. When he came down he looked suspiciously at Mike and told him that, while upstairs, he’d had a sudden, excruciating pain in his left leg. He said it was so painful he couldn’t put his foot on the floor.

Mike went over to the drawer, pulled out the voodoo doll and showed it to Phil. The pin had been pushed through its left leg.

Phil was aghast – the curse had apparently worked. Voodoo curses were no longer down to a psychosomatic reaction, as he had previously believed.


Mike told me that there had been a “consequence” for his experimentation with cursing.

“I was ill for three days afterwards,” he said. “I was full of aches and pains. I think that was the comeback. You see, I believe there is a karmic balance. If you throw a stone in a pond you make a splash and that is the magic. But there’s a price to pay for disturbing the balance. You can’t control all the ripples – the repercussions – of the stone hitting the water. And that’s the danger and is the reason why, as Christians, we say don’t do magic because you’re interfering with the natural order.”