Philippines’ Spirits Of The Wilderness 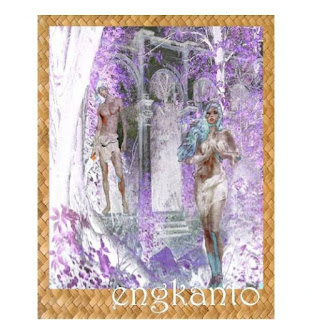 Engkantos and Engkantadas﻿
From Net sources, looks like Engkantos and Engkantadas are collective terms for any supernatural beings believed by the Filipino people, they would probably be called ‘tree spirits’, fairies or the like in other parts of the world. They are described to be fair skinned, blond, and blue or green eyes and far shorter or much taller than the average Filipino. They are also believed to be mostly tree dwellers. They are remembered for their beauty, grace and charm which attracts many people.


·          After the Angelus (6pm) parents do not allow their children to play outside the house because spirits are most active outside.


·          When you are swimming in the river and see engkantos, quickly excuse yourself because they may inflict sickness to you or change you into a flower or an ugly beast. (Provided you are practising Asma Sungai Rajah of course!)


·          You must say “tabi-tabi po” (execuse me) to make the spirits know your presence or something bad may happen.


·          The enchantress of the spring is a lovely maiden. If you see her, you may behold her enchanting beauty. Never utter a word or a sound for in this occasion it may actually save your life.


·          A lovely boy/girl should not stay long outside the house to avoid being taken by engkantos.


·          You must never reciprocate the love of an engkantada or engkantado for in doing this you would not only lose your world but also lose your soul.


·          Gathering orchids without permission will make you shed bitter tears for an enchantress might transform herself into a flower and will punish you for your wrong doing. The enchantress will make every tear drop shed a lifetime of regret.

Engkantos are said to be angels who revolted with Lucifer against the Lord. When the angels of God drove them out of heaven, some fell on earth. Those who fell in the forest or thick woods and lived in trees are the engkantos. Hence they will possess some extraordinary powers but are limited.

·          Engkantos are beings who refuse to worship God. The good ones will help people, while the evil ones harm.


·          Never interrupt or say anything if you hear music coming from a Balete tree for the engkantadas are having a party.


·          Hen cackling means presence of engkantos. Throw a handful of salt to stop the hens from cackling and at the same time to drive away the spirits.

·          Don't laugh or point to a Balete tree for fairies and enchantress may be living there.


·          If you cut a Balete tree, you will be punished for destroying the place where the fairies and the enchantresses dwell.


·          If a person is believed to have been taken by an engkanto, perform drumming near a Balete tree to recover the lost persons.