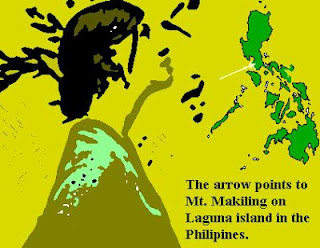 If Puteri Gunung Ledang has made Gunung Ledang in Malaysia a legend, then Philippine’s legend of Maria Makling has also made Mount Makiling famous.

According to legend, there was a time when the gods could live like ordinary mortals do. Although these gods were enchanted, they could speak, love, and even go to the market like what people do in our time. This story tells what happened to the daughter of two such deities. This is the story of Mariang Makiling.

Two deities, Dayang Makiling and Gat Panahon, had an only daughter name Maria. Because of her beauty and charm, she was the delight of her parents. The source of their joy and strength, Maria was, to them, a jewel, a treasure that made life full of light and laughter.

At that time people could talk with the deities face to face, and even sit with them side by side underneath a tree. People could also ask for help when they were in need, provided that they asked in a solemn manner.

It was the custom of Maria to go to a small market, sometimes called talipapa, on weekdays. Just like other women, she would on such occasions wear clothes made of silk and embroidered with flowers and wide stripes for this was the fashion at that time. Maria had long, black abundant hair which she usually decorated with pomelo flowers. When she went to the market, her flowing hair would touch her ankles. As she passed along, gallant men would bow their heads to signify their respect. When Maria went to the market, she was always accompanied by two Aetas, who served as her servants. These two servants stayed close behind Maria, and they both carried a basket each that was full of golden ginger. These golden ginger Maria would barter for such items needed for the home. There was no money at that time, and instead of buying, people bartered and exchanged their goods for the things that they needed.

On a market day, the residents of the area are not the only ones who would go to the talipapa. Merchants and people from neighbouring towns would also go to the market. One day, Gat Dula, the ruler of the kingdom of Bay, came to the talipapa to while away the hours. A piece of animal skin with fine hair caught Gat Dula's eye and he reached out to touch the fur. At the same moment, Maria was also reaching towards the same piece of animal skin and their shoulders accidentally touched. Their eyes met and Gat Dula bowed his head as a sign of respect and apology. And Maria responded with a shy smile as they parted from each other's company.

Since that first encounter, Gat Dula often visited the talipapa but he was not able to see Maria during these visits. One day, he saw Maria at the very place where they first met. He approached Maria and greeted her and Maria responded with a very sweet smile.

That was the beginning of their friendship which blossomed  Into love as the months passed. As time passed, the love affair between Gat Dula and Maria came to be known to Gat Panahon, Maria's father. Gat Panahon was angry. Even Dayang Makiling, Maria's mother, was distresssed that her only daughter was in love with a mortal. Maria was then forbidden to go down to the earth. Her parents even took away from Maria the power of enchantment which enabled a deity to look and act like an ordinary mortal. But even though Maria and Gat Dula could no longer meet physically, their love endured. Maria continued to watch over Gat Dula. During a battle with the army of Lakan Bunto, the ruler of a neighboring kingdom who invaded the kingdom of Bay, Gat Dula did not suffer a single wound due to the support of Maria's enchantment.

Unfortunately, Gat Dula's inability to see Maria caused him to fall ill and die. Maria asked the gods to give her the soul of Gat Dula and her request was granted.