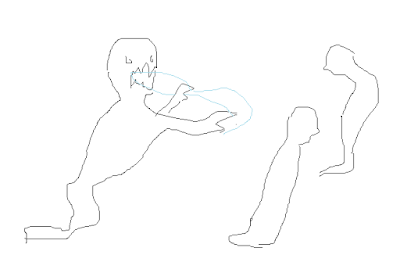 In Maoshan sorcery, ghosts can be changed into semi-demonic forms so that their timid characters became ferocious until they devour their kind...

Using ghosts against ghosts is a very old Maoshan technique normally for magic duel or exorcism purposes. This type of Maoshan magic is perhaps next to extinction because there are a lot of choices in taking care of ghosts in our modern time. There is no need to keep a ghost to eat another ghosts... Can't blame our forefathers as information system in old days is not so developed then.

A sorcerer would normally keep one or two fiercer and stronger ghosts inside bigger coffins in the dark corners of their house. These types of ghosts would normally be those who died of violent deaths or the souls of bandits or thugs died after being executed.

I used to accompany my master, Hong to various hotels across Peninsular Malaysia many years ago to perform exorcism. Well, in case you are not aware, hotels are one of those most haunting locations in this world as many people died in hotels...

To ordinary eyes, there is practically nothing to see. But those with psychic visions can see savage scenes similar to those depicted in programs like 'Animal Kingdom' where a cheetah chases after a group of antelopes. I must confess that  those were not pretty scenes though I have no compassion towards ghosts.

The most frequent places were Master Hong was called were KL and JB. Somehow hotels there seemed to be haunted during those days. Of course nowadays I am already out of that circle and dare not to comment if the situation is still the same. After all, my usual stays in hotels were relatively peaceful until now... *touch wood*!

A typical scene is that master received bookings from hotel owner claiming that his/her hotel is suspected to be haunted and 'ghost busters' are needed.

Once a date is set, master and I (usually the driver) would pick up the necessary items and the best 'ghost' for the job. After some basic prayers to the spirits in the altar, off we go to the destinations. Sometimes to save cost, we only travel after a few requests were received.

The routine is first the place is magically and physically 'sealed' so that no one is allowed to go in and out. Then those with psychic eyes will be able to see the presence of ghosts. Otherwise, the master will release his ghost servants to 'search and eat'...

As I have said, the scene of big chase small is just like a cheetah chasing after an antelope and made the kill; and of course devouring the prey too. This is not my favorite scene to see 'living things' being eaten alive. But I master was very proud of the victory of his ghost in becoming victorious.

Allow me to describe what I saw to you:

A big ghost risen from a small coffin and it started to wander about. The master if cannot see, he can feel what his ghost felt normally a sensation in his heart. Once a target is found, this ghost servant will glide towards the spirit and secure it. Depending on the command received, if the order is to 'eat' then the spirit shall be eaten. Otherwise it shall be bind onto a piece of wood for further processing.

So said, the victory is not guarantee as my master did suffer loses. In the event that his ghosts are weaker than those in the hotels; then the hunter became the pray. If the master failed to notice his ghostly servants became others' meal; he will have a big problem. Perhaps that was a reason why my master dragged me to most of his exorcism services.

Once Master Hong suffered catastrophic lost to his ghost collections where his opponent were some sort of demonic entities. Not only his ghosts were gone, the demon followed him back to his altar and destroyed his place. That was the time I last heard of Master Hong's news from a fellow friend.

Of course, the scene of big ghosts eat small ghosts can occur in magic duels too where two opposition ghosts were engaged in a fight: one to protect and the other to attack. These ghosts would normally fight to exhaustion ended up either being devoured or parish together.

A very common scene where big eats small can be seen in casinos, I mean smaller casinos where spirits were kept as bouncers to prevent gamblers using black magic in gambling. Back in 20 years ago, gamblers like to bring their 5 ghosts into casino to enhance their luck but ended up losing money. The reason is because their ghosts were being 'terminated'. Maybe that will be another story.