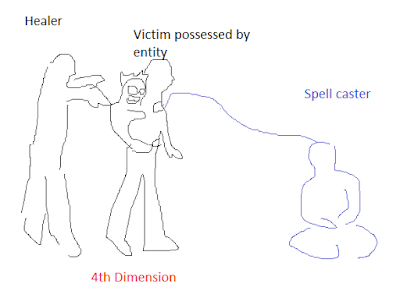 Magic duel occurred in the 4th dimension. If any parties either the healer or spell caster failed to enter this dimension, then he will be on a weaker ground to compete.

Most of the curses can be taken down without too much of a problem. In normal circumstances, the spell caster will not retaliate and any entities bounced back due to the kong tao removal process shall be absorbed by animals kept by the spell caster.

Most spell casters will keep many pets such as dogs, cats, chickens, turtles and lizards as their sacrifices in the event that the curses they cast bounced back.

So in reality, there is no need to carry out magic duels. I have so far carried out two magic duels with a Thai master from Chiang Mai.

Unlike common belief, Thai magic duel occurs in the 4th dimension and there will not be too much dramatic movements to be seen as depicted by the horror movies.

If any of the parties either spell caster or the healer failed to enter into the 4th dimension, he is deemed lost the dominance in the magic duel. The person remained in the 3rd dimension will be a sitting duck as he became the passive defender and he will not know what happened to his curses.

On the other hand, if both parties can see each other; then a real life and death fight will occur. Again, this situation is also rare.

Once I tried to help a person possessed by an extremely powerful demon sent by another master from Northern Thailand. My soul suddenly sent into the 4th dimension by Kurba Archan (grand master) and from there I could see the demonic entity clinging itself onto the back of the victim (as shown above).

There was a voice instructing me what to do. It first asked me to pull the demon off the back of the victim and throw the entity back to the spell caster who was still in meditation mode. Apparently my opponent couldn't see me as he has no awareness that I was near him.

After that the voice ordered me to take down the person's protective amulet.

As soon as I have done so, the demonic entity suddenly jumped onto its master's back and starting to bite on the person's shoulder. I could see that he was in pain and I was quickly pulled back to my altar.

When I awakened, I found myself was still in meditation mode.

The next day, the victim contacted me and told me about his dream. Very strangely too, his description matched what I have done. And more surprisingly, the person recovered within a week's time.

As to what happened to the other master, I heard he hurt himself on his right shoulder during meditation.

I performed another curse removal the same way, the other time was to remove a natural spirit known as Phi Phop.

Of course, real kong tao curses are very rare these days and those who can do astral travel can be counted by fingers. Sad to say, most masters are already very old. Good news is that we do not need to worry about kong tao any more.