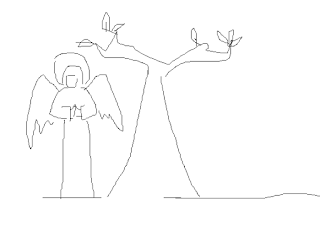 Every person once born will be given a tree of life in the Garden of Eden. It is guarded by his guardian angel

Tree as a whole has important magic and religious significance. In normal circumstances, trees represent 'life force'. In Mongolian shamanism, trees are thought to be sacred and represents the central pillar of the universe where the gods ascend and descend from.

The well beings of a person is reflected on his tree of life. If the tree grows well and flourishes, the person is doing well both in mundane world and spiritual. However, if the grows with some dead twigs and leaves, he is not progressing in his spiritual practices.

If the tree started to wither, then this person is dying. The guardian angel will leave the tree if the person did not pray to God and eventually the tree dies and the person also die together.His soul shall be sent to the pre-judgement place and be seated in a place appropriate to the merits he has done. This placement is done by the person's guardian angel.

If anyone is not doing too well in his/her life, then he/she can employ a Taoist to perform a ceremony to water and care for the tree or flower. Taoist would 'pay' the caretakers with joss papers so that they will do the work. Of course, the service of the guardian angel is free if sincere prayer to God is done wholeheartedly

Once when I was fooling with biblical conjuration, I called upon Lucifer and during the night, an angel in black came to me introduced himself as 'Lucifer'. He brought me to a garden said to be the Garden of Eden and pointed a small tree beside the tree of life. Lucifer than said to me: "This is your tree of life."

After that, Lucifer pointed to another tree beside me and continued: "This is the tree of your wife. Let us not get too close as not to offend the guardian angels."

After the short tour in the Garden of Eden, Lucifer vanished and I woke up from my dream. Very interesting introduction from Lucifer, or whoever that might be!