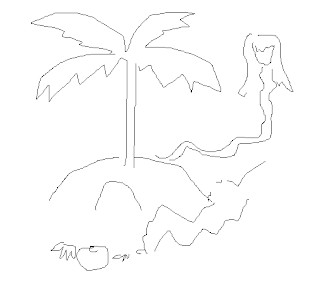 Flying head ghost or 'penanggalan' is a mythical creature said to be the product of man-spirit. Its hairs are very potent magic material too...

I don't normally cast Thai 'kong tau' (black curses) except on one occasion. Thai kong tau (降头) just like any other black curses, there is no 100% success rate. If the opponent is high on luck, then the kong tau will not take effect.

One day, an old Chinese lady came to me and introduced herself as Madam Yong. She wanted to cast a curse on her daughter's boyfriend. She said her daughter killed herself because she was conceived with the man's baby and he jilted her for another lady. In short, it is a complex relationship problem.

After some rounds of persuasion, the old lady didn't want to leave my place. The commotion caused my master to come out and I reiterated the story to him. After pondering for a while, master asked me to visit Madam Yong's house and took a look at the deceased before deciding what to do.

Like it or not, it is master's order; I must obey. So off we went and the lady's body just being laid into the coffin and she was wearing red. The deceased's eyes were still wide opened and her mouth has some traces of blood which Madam Yong think her daughter didn't rested in peace.

Master said: "This cannot do. Wearing red cannot make your daughter to seek her revenge. We can use the hair of flying head kong since her eyes are filled with anger but we will need some hairs and some ghost oil from your daughter. Do you agree?"

Madam Yong agreed as she said that we can do anything to do her daughter justice.

We extracted some oils and hairs from the decease's head. and asked Madam Yong to plant a banana plant on her daughter's grave. She must allow us the access to the grave for 49 days or the curse cannot take effect. And the old lady agreed.

So, for the following 49 nights, I was sent to the grave with some offering of lime juice, coconut, red chills and some incense. I tied a piece of red string around the banana tree trunk and holding the other end to chant. The purpose is to bind a flying head ghost with the deceased's body.

As the ritual progressed, I could see at first green smoke rose from the grave and then attached to the banana plant. Gradually the smoke resembled as if a lady's head with pretty long haired.

The next step is to empower the medicine to be consumed by the heartless man. I took the hairs collected previously, moist them with ghost oil and burnt them to ashes. Then commanded the flying head to enter into the ash.

I passed the ash to Madam Yong and asked her to put them into the food or drinks. If not, just spread the ash in front of the man's house.

Three weeks later a man with bulging stomach was carried to my master's place together with Madam Yong and another elderly couple. They said the couple was the parents of the heartless one. They had come to consensus and they want to settle the matter in peace.

According to their story, the young man started to feel his stomach bloated even though he was consistently feeling full. He was sent to the hospital and the doctor extracted out blobs and blobs of long hair. The doctors even suspected the young man was addicted to hair eating.

The parents thought that has something to do with their son. After some interrogations they reached Madam Yong, Since the wrong was on their son first, the couple has no intention to do a counter magic.

That of course, is the best solution although most of the time life is not so simple.

My master gave the young man some herbal medicine and holy water to drink. His stomach subsided a little. Since his condition stabilized, the visitors went home.

The one who suffered most is certainly the restless soul of the lady. For now she has become half-human-half-demon entity. That, I have no guts to tell Madam Yong... It doesn't matter since I am the only one who can see it.