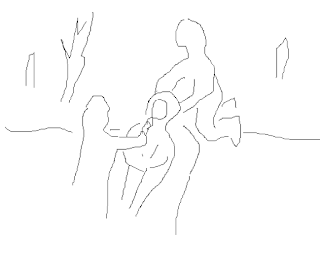 Hurry! Prop its head while I burn its chin for oil...

While people are afraid of corpses, corpse oils are one the most sought after items among all of blog visitors. Basically only two magical systems make use of corpse oil: the Malay magic and Thai magic. Malay magic is already in its extinction due to severe governmental control, so only Thai magic retained such practices thanks to the support of lustful folks out there.

The main ingredient is the corpse. Traditionally, an ideal corpse is that of a pregnant mother with stillborn, then secondly the young ones died in tragic circumstances. Nowadays even dead babies are used to make oils. To some extent, animal carcass also acceptable. Of course, there are many fake ones too.

Perhaps it is fair to say the proliferation of ingredients depends on their availability. It seems now that one can possibly find flying dead babies by simply walking under flats or even in the trash bins, or in the bush; the potential coming back of cheap corpse oil is great.

Outsiders may just think corpse oil as just corpse oil, insiders think otherwise. Corpse oils can be categorized into old tradition, new tradition or alternatives. This remains as 'commercial trade secrets' that have never been exposed until now.

I have had some experiences with the making of Malay and Thai corpse oils but I refused to be part of post-modern corpse oil making. Of course, all those were things of the past to me.

Perhaps let us just skim over variants of corpse oils though I know I have repeated myself many times:

Personally speaking, minyak dagu of Malay magic is the most authentic form of corpse oil that has ever been produced. The oil is produced by burning the chin of a corpse with a piece of burning white candle. Only a very small quantity of oil is produced on each corpse hence its rarity.

The best corpse is those of the pregnant woman with stillborn and secondly the single slaughtered. Babies are definitely out of the question.

Unlike common belief, chin oil cannot be transported across state boundaries as it is believed that the guardian spirits of a state will prevent the transportation of chin oil. Also chin oil is normally stored underground or else the owner may suffered lightning strike.

The making of minyak dagu...

Not long after the conjuration of the said slaughtered young ghost, Aminah contacted me again for another mission...

This time a pregnant lady has died during giving birth and she was just buried in the afternoon. Aminah waited for this golden opportunity for a very long time for she wanted some notorious 'chin oil'.

I didn't like the idea but as I have said 'curiosity kills the cat'; I also wanted to have a glimpse of how minyak dagu is made. And suddenly I found myself in front of Aminah's house. There was another gentleman, Ali who was Aminah's cousin.

It would be sheer labor work this time for the men would be in charge of digging while Aminah would perform the chin burning and oil collecting work.

Although the security around graveyards were not as stringent before compare to these days, we must still be careful and acted fast.

Since the path to the graveyard is narrow, we traveled on two bikes.

Another reason that we need to act fast is that dead bodies decay very fast in hot and moist tropical climate. This also depends on the condition of the corpse. In this case, the pregnant lady's corpse would rod and smell bloody bad too...

So said, we arrived at the destination around 11pm. The digging started almost instantly. Aminah became the lookout for caretakers or occasional passerby. While Ali and I became the diggers.

Since it was a new grave, it wasn't difficult to dig. We already reached the plank that covered the body after 20 minutes or so.

Once the plank was lifted, a smack of pungent decaying flesh smell coupled with bloody smell immediately filled our lungs. We started to vomit but Aminah shouted us to be hurry.

So we tied the corpse onto the plank and used a piece of rope to lift it up for Aminah to do her job.

With me propping up the head of the corpse, Aminah started to burn its chin with burning white candle. After a while only half bottle of liquid was collected. None of us talked too much during the process.

After Aminah was satisfied, we again lowered the corpse back to the grave and refilled the grave.

Luckily no one was at the graveyard that night...

Since the chin oil collected was less than 3 ml, I decided not to have any. I supposed Aminah would not part with her precious commodity. So I compromised and asked her a few questions to clarify my doubt:

"Why don't you collect oils from private parts too?"  I asked.

"It will be too messy not to mention dangerous. Do you want to bring the corpse to your house to process?" Aminah reversed the question back.

That was the only time I followed Aminah to do her job. I am not sure if she continued with her minyak dagu production. What I know is that such a pure form of minyak dagu would fetch a very high price in open market...