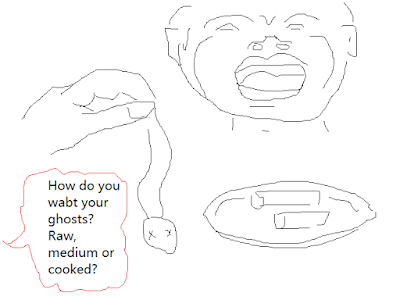 I am not joking... ghosts are good for energy replenishment and our health. So, how do you want your ghosts served?

I always say that please don't become ghosts and wonder about or you maybe 'eaten alive'!

Every time I saw my previous bosses, I will say to them: "Maybe someday we will have dinner together..." Of course, I didn't tell them that their souls shall be my dinner... Ha! Ha! Ha! That was a bad joke. Sorry..

It is true that not only big ghosts eat small ghosts, even Taoist practitioners too can have a taste of ghosts to increase their magical power. Why waste those free and nutritious free form of energy right?

This is a very rare ritual normally practised by Maoshan Taoists in the past. The practitioner must first worship an legendary Taoist deity, Zhongkui (钟馗). The origin of Zhongkui sounds something like this:

It was during 731AD-741AD period that the emperor had fallen sick. Even after the royal physician's treatment, the emperor has failed to recover.

One night, he had a dream. In that dream the emperor saw a big ghost and small ghost running about in the main hall The big ghost eventually caught hold of the small one. It dug out the small ghost's eyes and then shredded the small one into pieces and put the bit and pieces into its mouth.

The emperor stared at the ferocious big ghost and saw it was wearing an askewed hat and a blue robe exposing an arm. It had wire-like upright standing beards.

Xuanzong Emperor asked while trembling: "Who are you?"

The big ghost replied: "I am Zhongkui, since I was not successful in exam, I vowed to terminate all demons and ghosts in this world for your highness."


After the Xuanzong Emperor awakened from his dream. Not only he recovered but his health was even better than before. So, the emperor asked the court artist to draw out the picture of Zhongkui and since then Zhongkui is worshiped as the 'terminator of ghosts'.

So said, a Taoist cannot consume a ghost in his awakened state, he must first be possessed by Zhongkui and only then he can start enjoying those yummy and juicy ghosts.

Ghosts are normally bind to a small edible softwood coffin and then they are consumed together with the softwood coffins. There is a taboo in consuming ghosts, the number must always be odd numbers, i.e. 1, 3, 5... If even numbers of ghosts are eaten, then they have the ability to gang up against their consumer. How do you like that?

This special diet appeared to work as Master Hong always appear with red flushing face and his complexion is as soft as a baby even he was then in his 60's!

Perhaps I will try to catch hold of some of those ghosts of politicians and see if they are also as juicy as my bosses! Since Zhongkui is an imaginary figure, please don't ask me what would possess the body of the practitioner... Your guess is as good as mine: A bigger ghost of course!