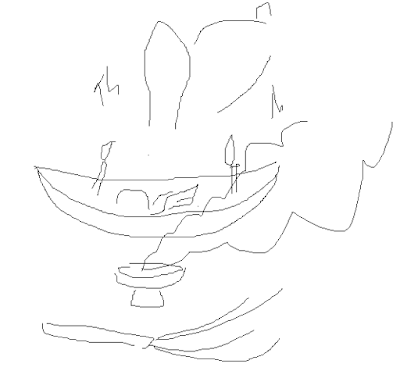 While I am not sure if Aminah has turned into a weretiger, at the meantime I knew that she also practised to be a bomoh. Her line of Malay magic is quite similar to old Thai magic as both system use almost the same setup and ingredients.

It is an open secret that the ghost of single slaughtered person is the prime commodity for any of the black magicians out there: From Far East to Africa collectively speaking.

One day, a villager in the kampung was killed in a gangster fight. Both Aminah and I visited the funeral service and the graveyard. Aminah suddenly pulled me aside and asked if I was willing to do her a favor.

I thought it was a little odd as I was not her only friend in the village. In a state of hesitation, I asked: "What are you up to?"

"I want to do a ritual tonight but I cannot bring so many stuffs with me. I need your help since you have a bike and you are not local!" Aminah whispered.

"Okay Minah. Promised you will not turn into a tiger and devour me alive." I shrugged. Of course, I was also curious to see Aminah's secret ritual. After all outsiders hardly have a chance to get a glimpse of Malay magic in action that I can promise you. Although people said 'curiosity kills the cat', I still took a stab with a precaution. I told my family members that in case I did not return the next morning, do something. One thing for sure, I cannot afford to be careless.

I went to Aminah's place at about 6pm as promised. She immediately hopped onto the backseat with her stuffs and off we went to the graveyard.

The place was still clear enough and as it was approaching Maghrib, no one would wander about and the place looked pretty safe.

After some search, we finally found the new grave. My job was temporarily done and I sat aside to see Aminah in action: she laid down all her items in front of the tombstone. Among the items are a piece of palm leave stem, foods and candles. After that, she burned some benzoin resin and thick smoke immediately produced and the odor filled the air.

Then, Aminah asked me to watch out for any movements on the grave. After about 20 minutes or so, I saw black smoke rose from the grave and I hinted Aminah. She nodded her head and she took up the palm flower and struck onto the tombstone while chanting:

"Oh you poor single slaughtered ghost, come to your master. You belonged to me now. I will feed you but you must serve me well..."

The black smoke was seen moved from left to right as if wanted to escape but finally stay still and gradually moved towards Aminah.

At this juncture, Aminah opened a bottle filled with some oil and put it on the ground in front of her. The black smoke was seen slowly entered into the bottle and Aminah quickly close the bottle with its cover.

We hurriedly returned home as being caught red handed would mean trouble.

I wasn't too interested with the ghost but I was more interested in the oil in the bottle. After some bugging, she finally said: "Corpse oil."

And that would be our next project...