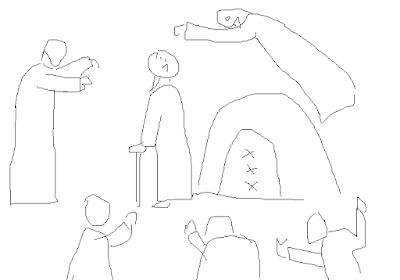 First, a Maoshan sorcerer must already have his 5 ghosts in active mode or the magic will not work.

I have not done such a ritual but my fellow sorcerer, Lee has. The idea is same as with the modern day kidnapping. First, the grave of a deceased filthy rich must be identified. This is normally not a problem. Loads of obituaries can be found in the newspapers.

One day, a very rare opportunity came by. One famous rich guy kicked the bucket and Lee wanted to 'borrow' some of his money but he couldn't see ghosts. He knew I can see spirits so Lee promised that we shall have a 50 - 50 share. I agreed partly because I was also interested in seeing how this system works.

So, when the time is right, we proceeded to the rich man's grave and laid 5 small coffins in front of the tombstone. We also prepared an additional small coffin for the rich ghost.

Lee started chanting to dispatch his 5 ghosts to force the rich ghost out from its grave. While I stood by kept a watch out for the fugitive rich ghost.

About 10 minutes later, I saw a black shadow came out from the tomb stone so I shouted to Lee: "At the tombstone!"

Lee immediately used his index finger to point at the tombstone and I saw a few white shadows dragged and pulled the black shadow into the small coffin. And I shouted: "Close the cover!"

Lee was quick and the small coffin was again covered in a jiffy.

We headed back and Lee said he will put the small coffin in to his porcelain pillow and sleep on it hopefully he will get a dream.

A few weeks later, Lee gave me $5000 and said that it was my fair share. The rich ghost has given him a lucky number and he bet big on it.

The rich ghost was subsequently released back to his grave as we just want to 'have fun'.

On the other hand, this ritual can also be used to cause the rich man's relatives or business to suffer great problems. That was not our intention. Not for now at least...

Thinking of holding someone at ransom and legally? Only in the after world! So, for those rich ghosts out there, beware! Who says one can Rest-In-peace? Ha! Ha! Ha!